Detecting a 2.4 GHz transmission for under 1 EUR

... assuming you have a scope or a fast voltmeter.

As I was debugging a wireless mouse based on a 2.4 GHz proprietary protocol, I wanted to detect the transmitted signals. Note that I purposefully wrote “detect”: It was sufficient to see how often the transmission occurred (and if at all) and whether the link was unidirectional – i.e., only the mouse transmits and the PC-side dongle is only a receiver – or bidirectional. I did not want to reverse-engineer the protocol to decode the data.

While my lab is well equipped for signals from DC to about 1 GHz, 2.4 GHz is beyond the capabilities of my instruments. I was pondering where to borrow a spectrum analyzer or a mixer, before it occurred to me that I was overcomplicating things. If one is merely interested in detection of a transmit signal, one can use a concept from the very early days of radio engineering: an envelope detector. This idea is still relevant today. For example, during my time as a research assistant in an RF and microwave engineering institute, my officemate developed a 24 GHz communication system partly based on envelope detection.

However, I didn’t have one of the expensive and exotic mmWave detector diodes available, either. But then I suddenly recalled how as a kid I once built a detector radio. Searching through my electronic components drawers, I soon found the key component of such a detector radio: a germanium point-contact diode. Compared to a conventional silicon diode, the material of most modern semiconductor devices, a germanium diode has a smaller forward voltage, resulting in higher sensitivity for small signals. Also, the delicate point-contact is advantageous for RF applications. Interestingly, this type of diode is still made today (e.g. as 1N60) and available for under 1 EUR. 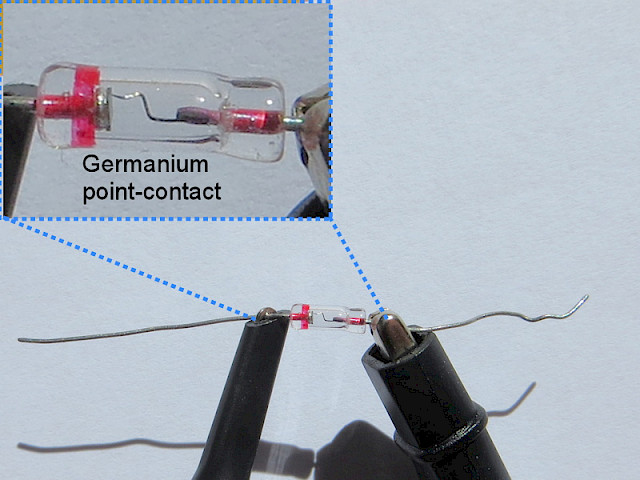 Even though the detector radio I once built was for frequencies in the kilohertz range, my RF engineer “gut feeling” told me that this ancient diode should be good for 2.4 GHz, too. Thus, I hooked up my scope to the diode and held it close to the PC-side dongle of the wireless mouse. Success! I was clearly seeing periodic transmissions, even when the mouse was not being moved. This already answered one of my questions: the communication is in fact bidirectional. 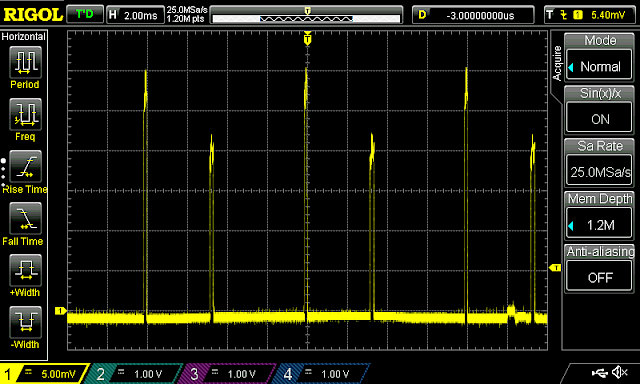 I was impressed how well this simple diode detected the 2.4 GHz signals. This may be because the diode including leads is almost half a wavelength long at that frequency, making it an improvised dipole antenna. On the next screenshot you can see the PC-side dongle (large pulses) and the wireless mouse (smaller pulses, because it was farther away). One can clearly see how often transmissions occur. Task accomplished! 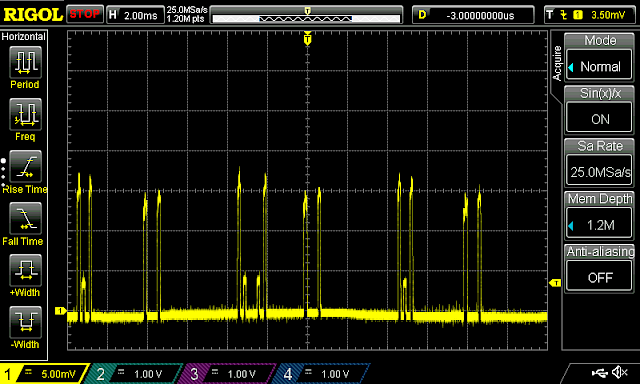 Note that the diode is a broadband detector. If one wants to make it more sensitive to certain frequencies than to others, one needs to add a resonant circuit, usually a combination of an inductor and a capacitor – like it is done in the radio that I built as a kid. But as it is, the detector diode can be used to experiment with other transmitters. Consider, for example, my mobile phone (in GSM mode at ca. 900 MHz). You can see the transmit signal pulsing with 217 Hz as expected for GSM: 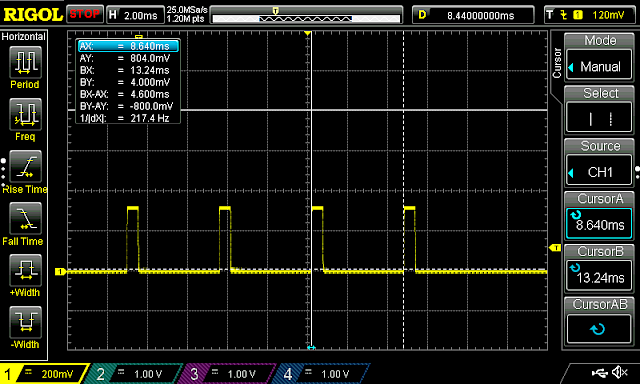 PPS: Presumably, a fast silicon Schottky(!) diode could be used as well, since it also has a small forward voltage. But it was more fascinating to me to use this old germanium diode.